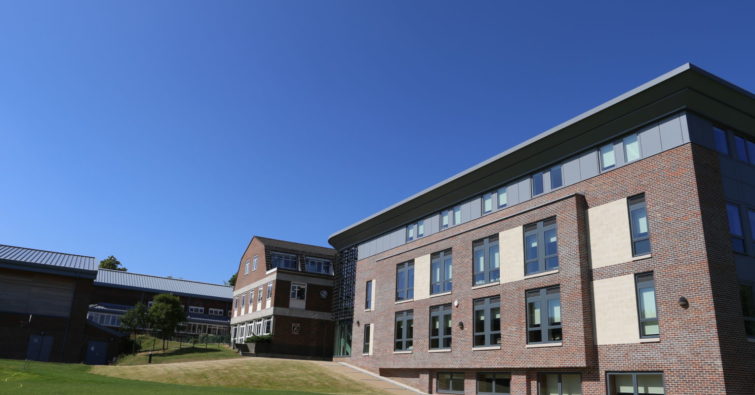 Walthamstow Hall has always been an environment which evolves to meet the future needs of students.

Since moving to Sevenoaks in 1882, Walthamstow Hall has been constructed around the needs of students. Every building on campus, from the original Arts and Crafts inspired building, through to the new Sports Centre, Pre-prep facilities and Sixth Form Centre, has been designed and built for optimum learning.

Walthamstow Hall Senior School’s Main building, containing the Victorian vaulted Dining Room and Erasmus classrooms for Languages and Humanities, is the heart from which the School has continued to expand and evolve.

In 1992, Walthamstow Hall Junior School, originally located at the end of the Sports Field, relocated to its own dedicated campus in nearby Bradbourne Park Road, moving into the site of the former St Hillary’s School. The Junior School site has developed to include specialist facilities purpose-built with smaller pupils in mind. It boasts a dedicated Science Lab, Art Room and Music Block alongside spacious classrooms. In 2014 a new Junior School Dining Room was built alongside new facilities for the Pre-prep department. Junior School pupils also make use of the Senior School campus, in particular the Swimming Pool, where they enjoy weekly lessons throughout the year. The Junior School is located within walking distance of Sevenoaks station, making it particularly convenient for parents commuting to London.

The evolution of the Walthamstow Hall Senior School site has been on going since 1882 but there has been a very focused, near constant programme of development in place since 2003.

Much building and refurbishment, mainly from fee income, in the last 10 years, most recently a super new sixth form centre including extra science and technology areas plus IT hub.

1838 – Founded in Walthamstow, as a Home and School for the daughters of missionaries.

1882 – Relocation to purpose-built Arts and Crafts building at our present site in Sevenoaks.

1975 – Opening of the Salmon Wing for Art and English.

2003 – The Erasmus Centre for Humanities and Languages opened.

2012 – Opening of the new student entrance, reception and gallery space, The Hub.

2013 – Refurbishment of The Ship Theatre to celebrate the school’s 175th Anniversary.