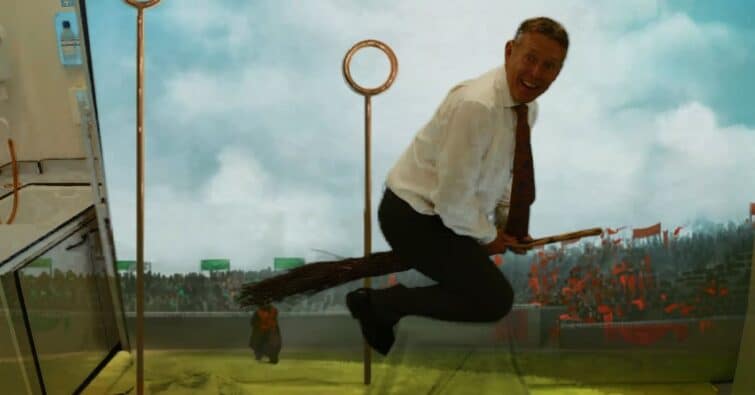 “Wizardry in the Real World” is the theme of this year’s Science Week.

The Physics Department’s “Levitation and Invisibility” session saw people flying on broomsticks and wrapping themselves in an invisibility cloak (thanks to a Green Screen), watching objects rise and fall slowly (using magnets), building a battery-run hovercraft and experiencing illusions.

Reflecting the owl theme running through the week, each House had to solve a code to free their (soft toy) owl from a cage. Our beautiful Wally Hall Hedwig owl in the Hub (created by the Art Departments Miss Court) will be completed with feathers designed by students.

The bigger theme is to highlight problems in our natural world and to emphasise the importance of STEM in trying to resolve them.

In The Ship all day on Wednesday students are getting close to some exotic creatures in the Slithery Show. A royal python is being draped around necks, a Madagascan Tenrec (looking like an elongated, soft hedghog), a Peruvian tegu and two types of tortoise are among the animals on display.

Thursday saw a barn owl and a tawny owl visit the Science Block – thank you Willows Bird of Prey Centre. In the labs, there were fresh and dried owl pellets to dissect, Biology Sixth Formers dissected a rat, a frog and a bull’s eye for others to see. Students identified herbs and spotted the camouflage unusual creatures use in nature. Plus, solving the code in the cure remedy for House points.

It was a fiery finale on Friday in Chemistry;  with wand ‘magic’ teachers made a fire spells – and the overall House winner was Quebec.