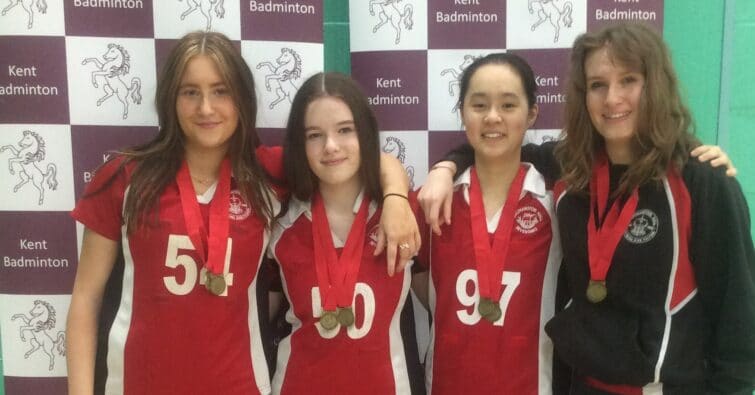 Astounding success in badminton; our Key Stage 4 team won both the Boys and Girls Elite events at the Kent Schools Championships.

Walthamstow Hall has won the National Championships in Badminton for the last two years they have been held. As the National event was cancelled again this year, Wally coach Jo Muggeridge suggested to the tournament organisers that our teams play in the Kent Boys event as well as the Girls, to give them an extra challenge.

This was a challenge the KS4 team met head on, beating Dartford Grammar 3-2, Simon Langton Grammar 5-0, Skinners 3-2 and in the final, beating Gravesend Grammar 3-2 to win Gold in the Boys Elite.

The KS4 team: Sofia, Ellie, Lily and Annabel, all in Year 11, also won the Girls Elite event –  impressive enough in itself.

Walthamstow Hall had two teams in the Key Stage 3 age group. All three teams were playing in the Elite events, comprising the top eight school teams in the county. 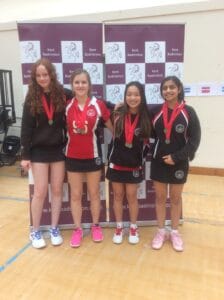 Our KS3 A team; Abi, Annabel, Lara (all Year 9) and Shraddha (Year 7) won Gold in the Girls Elite event, to become Kent Schools Champions. They also won Silver in the Boys Elite event, narrowly missing out on the Gold. In the Boys Elite, the Wally KS3 A team beat Sevenoaks 4-1, Dartford Grammar 5-0, Simon Langton Grammar 5-0, before losing 1-4 in the final to Skinners. 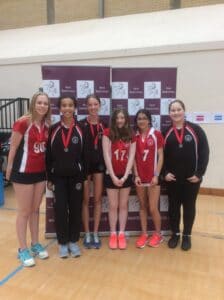 Our KS3 B team: Anna, Neve, and Zoë (in Year 8) and Emma, Alice and Issy (Year 9) won Silver in the Girls Elite, coming second to our A team. They came a respectable 6th in the Boys Elite.

Leading them to all this success is Walthamstow Hall’s badminton coach Jo Muggeridge. She praised the students’ efforts: “All girls displayed impressive badminton skills and had impeccable behaviour on court, they were a total credit to the School. They were elated with their achievements.” Ms Muggeridge said she was proud of the team effort, “You can’t win with just one superstar, you need the depth in the team and we have great players coming through”.