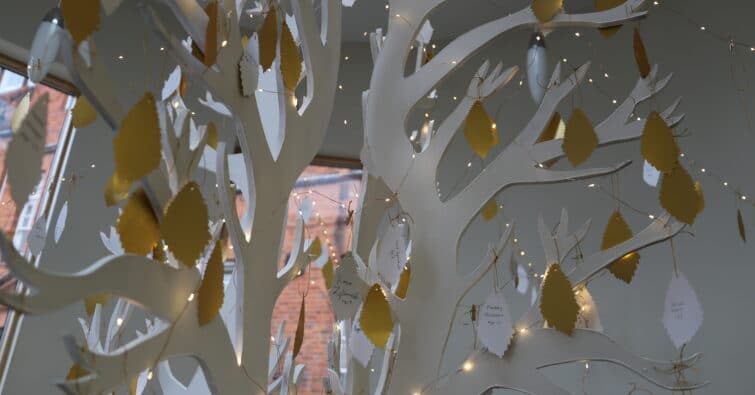 This week we are remembering the Holocaust, as Thursday marks the anniversary of the liberation of the Auschwitz-Birkenau concentration camp in 1945.

Philosophy and RS teacher Mrs Dawkins led Monday’s Assembly, acknowledging that the horror of the Holocaust – in which six million Jews were murdered alongside others persecuted by the Nazi regime – can make it hard to understand.

Staff and students have written the names of Jewish children murdered in the Holocaust onto gold leaves, which they have attached to our Tree of Remembrance in The Hub.

Mrs Dawkins said the key lesson of the Holocaust was the need to stand up against injustice, because concentration camps cannot exist in a society based on equality and fairness.

Students heard about people who risked their lives to save others during that time – and how deciding to resist and be ‘the light in the darkness’ requires courage.

In a short film, an elderly Jewish man described arriving in England aged five on the Kindertransport, which rescued children from Nazi-controlled territories before WW2 broke out.