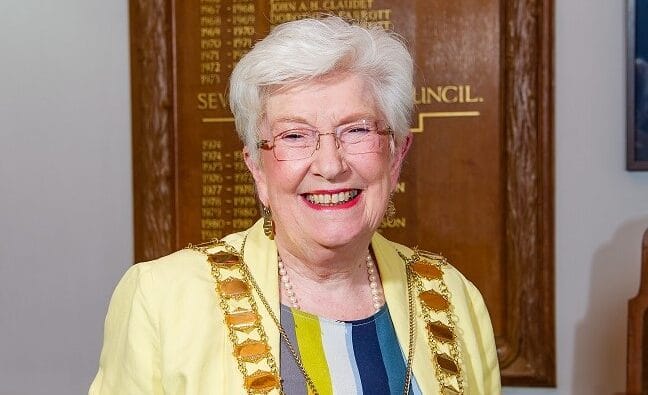 We were encouraged to give something back

We are delighted to see that Walthamstow Hall Old Girl Dr Merilyn Canet has been elected Mayor of Sevenoaks for 2021-2.

Dr Canet attended Wally in the 1950s and became the first girl from the School to go on to study dentistry.  After training in London, she ran her own dental practice in Sevenoaks and sent both her daughters to the School.

We caught up with Dr Canet by telephone, and started by asking her about her priorities for her year in office.

“The environment and climate change, these are the crucial issues for our time – also to restore the community and family relationships that have been so damaged by the pandemic. I have been meeting schoolchildren, emphasising to them that their voice can be heard. My theme is the simple steps you can take to stimulate kids’ curiosity about the natural world.”

Dr Canet said her own childhood curiosity about the natural world found an outlet when she joined Walthamstow Hall, aged ten. “I particularly enjoyed the Young Farmers’ Club. I was brought up on a farm at Sundridge and some of the animals from home came to School, such as four little piglets whose mother had post-natal psychosis.”

Dr Canet’s political energy appears to have its roots in her time at Walthamstow Hall also.

“The teachers were ambitious for us academically and in other ways too – to be caring. We were probably the brightest girls in the area, and we were encouraged to give something back.  Being lucky enough to be healthy, intelligent and to have these academic opportunities, we had a responsibility to give back to others less fortunate.”

Overall, it is the breadth of her education that Dr Canet feels has been most important.  She explained that the aesthetic sense she developed under her art teacher Miss Gash – which may have seemed peripheral at the time – has served her well both as a dentist and in the painting and sculpting she took up in retirement.

“The general education we were lucky enough to receive developed me as a rounded person and at different times has helped me to live a full life. You never know what will be useful.”