The show goes on

Different times call for different ways of working, so this year’s Senior School drama production is going to be a film (not a filmed stage play) of Charles Dickens’ A Christmas Carol, made by Blind Crow Productions.

Peter Wilkinson from Blind Crow came in on Tuesday to tell our students about film-making.

Pete is perfectly placed for this; he is a trained actor and for five years lectured on Performance for Live and Recorded Media at Teesside University. He got students up on stage to help demonstrate different acting styles and showed film clips and stills to illustrate his points about camera angles.

The reduced cast will be drawn from the Sixth Form and Head of Drama Mrs Bower-Morris has held the first read-through ahead of allocating parts. 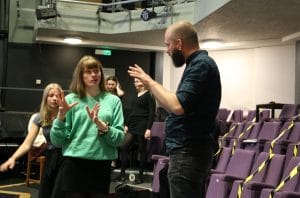