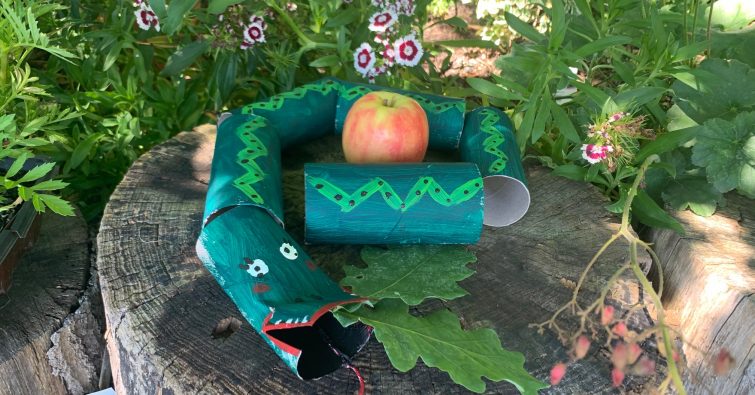 The focus of Year 7’s Theology and Philosophy lessons this year has been ‘The Big Story of the Bible’. The topic has been brought to a close this term with pupils  re-telling the stories by using creative media of their choosing. Year 7 have stepped up to the creative challenge with a fantastic array of poems, collages, artworks, textiles, stop motion animation and models, like Francesca’s snake from the Garden of Eden pictured above. We’ve included some other examples below.

Painting The Fall by Danielle 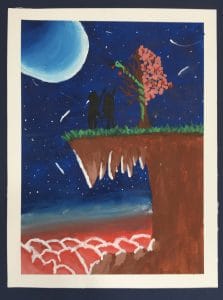 “I painted the tree half full of apples and beautiful leaves and the other half had one apple with loads of empty branches and a snake. I thought that the right side with all the apples and beautiful leaves represents the half that god had given them as he filled it up for them also it was supported firmly by the cliff which meant that it is safe and a good option. The other half represents the tree that god forbid them to eat from as it only had one apple, a snake and loads of empty branches it was also slightly unsupported by the cliff, as if it was about to fall off.

I think that the cliff symbolizes god. I think this is because the bad half (left) is unsupported as he forbade them to eat from the tree of knowledge.

I think that the two people standing on the unsupported cliff represents Adam and Eve. I think this because they are both pointing up to the lonely apple by the snake, as a similar thing happened in the story of the fall when they betrayed god by eating from the for tree of knowledge, which they were not allowed to eat from”.

“I imagined that the Garden of Eden would be beautiful and majestic, the quality for a King, which is why there is gold. However, the gold on the tree I saw to be that the tree grew keys rather than apples, as by taking the fruit is like taking a key to leave Eden and go into the outside world. The snake is giving Eve a key, tempting her. Adam and Eve are made out of fabric with lots of different colours all mixing around, I imagined these to be thoughts or emotions. The snake is extremely large as I thought he would be because he carries around a lot of sin and temptation.

On the other side (it is double sided so it had to be taken in two photos), I imagined the floor to be spiky and challenging and painful to walk through. The sky is red and extremely plain, and the ground is black”.

The Fall by Florence L

The Fall by Florence L 2

The Plagues by Gabriella