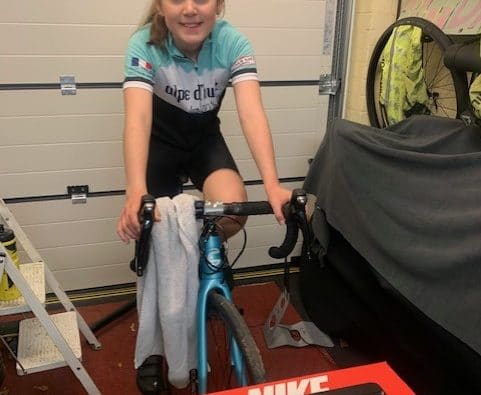 We’re really enjoying hearing about the wonderful ways in which Senior School students have been putting their free time to good use during lock down. A selection of stories from this week include: Ella K in Year 9 completing a Python coding course, Rosa in Year 13 learning British Sign Language and Ellie in Year 12 writing letters to new ‘penpals’ at Rockdale.

Alice S in Year 7 has also been very busy. During the Easter break she took part in two virtual fundraising bike racing events which raised funds for the NHS. In the first, hosted by Adam Peaty, she and her sister Emily worked as a relay team and cycled 100km in 3hrs 54! The second race she took part in was hosted by Geraint Thomas, as part of a 3 day event during which he cycled for 12 hrs a day over 3 consecutive days, to raise funds for the NHS. Alice took part in one leg of his challenge and cycled 45.9km in 1hr 55. When the Brighton marathon, which her Mum was due to run in, was postponed Alice encouraged her to do a ‘lock down marathon’ in the garden and around Knole and accompanied her for 10 miles of it, raising money for Alice’s Arc as she went and racing back to set up a toilet roll finish line! Alice’s Mum said, “Having her run the 10 miles ‘in the outside world’ with me was amazing – she kept me going when my feet were blistered and bleeding! I wish she could do the ‘real’ marathon with me!”

Well done to Alice and her Mum, Ellie, Ella, Rosa and all of our students for remaining so positive and putting their time into such good works.