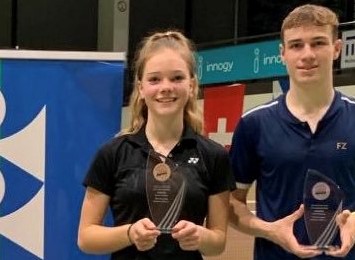 Congratulations to Holly Williams who won gold at the U19 mixed doubles German International badminton competition, and silver in women’s doubles.

Congratulations also to Sofia Bao who has won the Gold Badminton Event Star in the U15 Ladies Doubles.

On Thursday 10th the U13 squad ran the Somerhill Cross Country Cup and the team finished in 2nd place.

Our U14 and U15 teams played in the Abbot’s Hill Tournament on Saturday. Both teams had a number of victories and defeats – with wins against Abbot’s Hill, King’s Canterbury, Tudor Hall, North London Collegiate and St James.

All students played well in given the testing weather conditions. Most Valued Player awards went to Alice and Olivia for some excellent saves whilst in goal throughout the day.

A total of 16 netball wins for Team Wally last week!

Special congratulations to those teams who won National Cup matches and will progress on to the next round:

Well done also to both U12 teams who played a Versatility Match against Kent College on Saturday, winning 13-4 and 18-6.