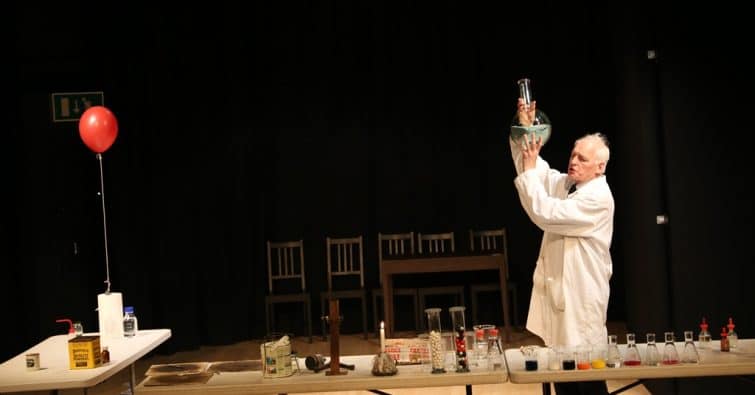 Junior girls joined Senior School students for a fantastic show in The Ship to end our Science Week, put on by the force of nature that is Dr Andrew Szydlo.

“It’s not a magic show, it’s a chemistry show!” he shouted, as he set off chemical reactions to make liquids change colours, ping pong balls blast out of tubes and a lid explode off a paint pot – nearly taking out one of the theatre’s lights.

Dr Andrew kept up a fascinating running commentary of everything he demonstrated, giving historical context to every scientific fact.

He used hydrochloric acid and the alkali sodium hydroxide to take us through the colour sequence of a liquid. He explained how ancient peoples distilled the “black smelly water” that is oil, while demonstrating the chemistry of a combustion engine. Fire, air and high explosives were his playthings in a thrilling show of scientific success.

We were delighted to continue our tradition of hosting pupils from Lady Boswells and St John’s Primary School at one of the shows.