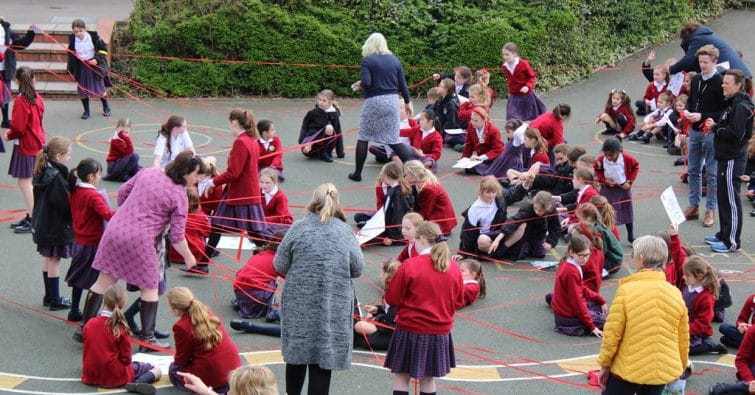 During Collaboration Day at the end of the Spring Term, girls were shocked to discover that, according to the Carbon Trust, schools account for over half of the UK’s local authorities’ carbon emissions. This prompted some serious discussions about the effect on our planet, why schools are so energy hungry, and what we at Wally could do about it!

Girls were fascinated as they explored the Google Earth Lights app which shows how the globe lights up at night when people around the world ‘switch on’. They were able to identify which countries use the most and least lighting power and discuss why, as well as spot major natural features like the Himalayas by their lack of lighting energy.

This worldwide perspective provided girls with a powerful example of the power of collaboration on a global scale, and there was much discussion of how collaboration works for negative as well as positive purposes – the light pollution visible from space was a real eye-opener!

In various workshops during the morning, girls considered what we could do at our school to save energy and reduce our contribution to the enormous effects caused by power consumption in the modern world. They decided that a great place to start was work to together to save energy by turning off lights, shutting doors, walking wherever possible and working carefully and efficiently to ensure that no energy is used unnecessarily. Everyone realised that on their own nobody can have much effect but, by working together we can make a real difference to our school, our town, our country and our planet.

To finish off the ‘illuminating’ morning, girls enjoyed working collaboratively to build their own National Grid. Having considered how electricity gets from Power Station to Plug, girls designed their own Grid elements – power station, pylons, substations, factories, schools and houses before connecting them up with different widths of red ribbon to form their own network.

Once the ‘Electricity Board Inspectors’ were satisfied that the ‘Grid’ was complete, the ‘power station’ came on line and powered up ‘Wallytown’. Girls had great fun working out and demonstrating what would happen in a power cut, or when a transformer failed, while our ‘carbon emissions’ went crazy during periods of peak demand.

By the end of the morning, girls most certainly understood how much collaboration it takes to power the school – both in terms of electricity as well as team work and joint effort – and everyone was determined that Wally would do our bit to help reduce schools’ carbon emissions in the UK. Well done girls!