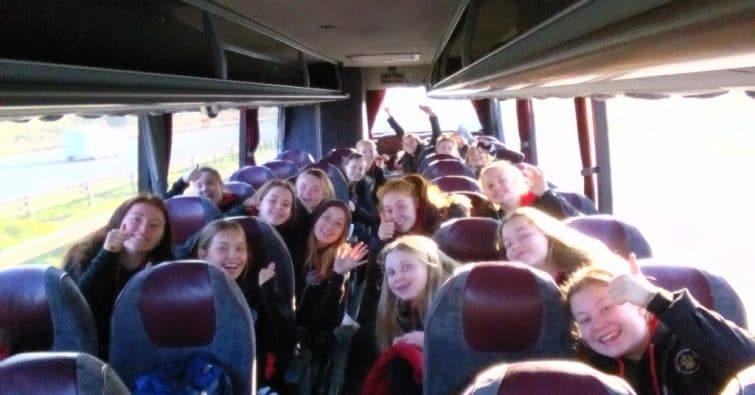 It was a very early start (leaving Wally at 6.15am) so many of the group were catching up on sleep on plane.  An 8 hour flight later and it was time collect our suitcases – only to be greeted by an extremely long line at passport control. Between 2 and 3 hours later we had finally made it through passport control. Welcome to America!

After meeting our American contact and boarding the bus, we headed for our first stop, Arlington, Virginia. A quick stop at Five Guys followed, before checking in to the hotel and trying to adjust to the time difference.

Getting straight into action, day two saw the first fixtures being played. With excitement in the air upon arrival at Bishops O’Connell, a school with facilities ‘straight out of films’, ‘just like High School Musical’ etc, there were lots of pictures being taken and Snapchats being sent. After a slight mishap which ended with the girls giving the hosts an acoustic rendition of our national anthem, we were underway.

Every one of our American hosts was so welcoming

A mix of seniors and U15s played against O’Connell’s Varsity team (the school first team) and put on a display that showed promise. Getting off to a slow start in the first few minutes, Wally slowly grew into the game, with some strong and patient attacking play. After a fairly even amount of possession, O’Connell’s fitness levels (and lack of transatlantic flight in the last 24 hours) started to pay dividends, pulling away towards the end of the game with a final score of 19-7.

A predominantly U15 team accepted the challenge of the O’Connell Junior Varsity side. The back and forth nature of this game was more reminiscent of a basketball game, with most goals coming by way of a fast break. Unfortunately Wally could not quite hold the JV side for the full game, narrowly losing 8-7.

After the games had finished all players then headed to a local BBQ restaurant for lunch where there was an exchange of gifts between the two sides.  We gave them tshirts with the Wally logo, and some choice English National Trust stuff.  They gave us drawstring bags with their logo on. Girls then left with their hosts to go to their host houses, before attending the ‘Super Dance’. Dating back over 40 years, this is a 12 hour dance from noon to midnight to raise money for a local Cystic Fibrosis charity.  It’s raised roughly $4.3 million since its inception. The girls were then taken out for food before settling in for the night.

Sunday was a day for sightseeing with the girls’ host families, with the majority heading into DC. With a lot to see including the Capitol Building, Washington Monument and The White House, along with the added spectacle of the cherry blossoms in season, there was a lot to cram in in just a day! After a lot of walking and picture-taking, the girls then returned for the last night with their first host families.

On Monday, the girls were dropped off at the school by their hosts and bid them adieu. It was time to leave Virginia and head to the National Aquarium in Baltimore.

After a perusal of the exotic fish, even more photos taken and a dolphin show, it was time for lunch, with the girls free to explore the Inner Harbour which consists of restaurants, candy stores and impressive views.

Following lunch it was back on the bus to head towards Salisbury and another round of host stays. Upon arrival at James M Bennett High School the girls had the chance to watch the opposition in action. With Miss Bridge taking some tactical notes, the girls began to mingle with some of the host families while taking in the game. Watching part of the boys’ game was a new experience for all – fewer rules and more rough – then it was time to head to team dinner, hosted by one of the host families. Even more mingling ensued before it was time to head to the girls’ home stays for a good night’s sleep before a training session in the morning.

The day began with a training session on the training pitch at James M Bennett High School before heading to Ocean City. Roughly 45 minutes away from Salisbury, Ocean City is a tourist hot spot that contains amusement parks, t-shirt shops and a long boardwalk.

The first stop was to play miniature golf, with Mr Christian winning the staff game. After the golf, the girls were dropped off at one end of the boardwalk and were free to wander to half way down, taking in the beach and multiple shops for tourists. After the girls had eaten and were all shopped out it was back on the bus heading to Salisbury to get ready for the evening’s games.

Without suffering from jet lag, Wally were a lot quicker to start than in their previous games, resulting in a more accurate representation of the game in the final score, with the Wally Senior team losing 7-5 to Bennett’s Varsity team. The U15s then took on Bennett’s Junior Varsity team, putting on an impressive display. Holding the JV side to a handful of chances, the 15s were clinical in attack, racking up 16 goals and not allowing a single one.

Team dinner was then hosted by a different family, with the girls enjoying table football, air hockey and basketball after eating. After they had all eaten their weight in sweets and chocolate, it was back to their host families’ for the final night in Salisbury.

We headed to the Lacrosse Hall of Fame Museum back in Baltimore. Our guide gave us an extremely comprehensive tour – which after a three hour drive was perhaps a little testing for the girls’ patience. They then enjoyed free time to roam the museum on their own. We then drove to Methacton High School in Philadelphia for the afternoon’s fixtures.  All the teams have been so friendly – and generous.  This time we were each presented with a headband featuring half and half Stars and Stripes and the Union Jack.  Then on to the games, both matches were very tight.  The Varsity scoreline perhaps not reflecting this at 16-9.   We managed to win the junior Varsity game by one goal. Afterwards we went into the school where the parents had arranged food for us. Pulled pork, pulled chicken, quite a feast.  The girls then peeled off to their host families for the night.

A day at High School!  The girls spent the first two lesson of the day with their host students. They loved it.  There was an extremely enthusiastic English teacher who leapt out of his chair to welcome us – such American warmth was wonderful. Afterwards the girls discussed which of the Wally teachers back home could deliver a comparable warm welcome.  The winner – Head of Geography Craig Sullivan! Another noteworthy point – one of the Methacton students mistook me – Mr Christian –  for a Year 10 pupil. Seriously! I didn’t hear the end of this for the rest of the trip.

After this it was sightseeing in central Philadelphia, we saw the Liberty Bell (a big symbol of American independence), and went to a local market for lunch before heading to North Penn High School for our next fixture.  Wally’s sport teacher Kate Howlett, who has been on several USA Lacrosse tours said she had never seen a Wally team play at such a high level on tour as in this Varsity match.  Sadly it didn’t translate into a win, but the effort was there.  We won the Varsity junior 8-7. Another team meal with North Penn at their massive school, featuring famous local dishes: hogies (a special bread sandwich), cheese-less pizza and tasty cakes.  Our goodie bag from our generous hosts included local delicacies soft pretzels, Hershey’s Chocolate and Mike and Ike’s (jelly beans).

Back to Methacton for the night.

By popular demand the girls went back into Methacton High School because they’d enjoyed themselves so much the day before. After two periods there we drove to the King of Prussia – the USA’s second largest shopping mall.  And it was big. We spent far too long there.

saying goodbye was a frenzy of Snapchat and Insta address-swapping

Then it was on to New York for our final night before flying home.  We had two hours of free time which is when some girls went to Time Square.  Then it was dinner all together – this was Mariella’s 15th birthday so we got her a cake! And then it was onto the Empire State Building.

On our final day we visited the 9/11 memorial museum right by Ground Zero – the best museum I’ve ever been to – it was very moving and I know some of us shed some tears. After that we watched baseball, the New York Mets against Washington Nationals. This was a first for all of the girls, but they were quick to understand the game.  Then onto the airport.

We have packed in so much to this trip, it’s been amazing. Every single one of our American hosts was so welcoming and generous, they insisted on paying for everything.   As for our girls, everyone put their all into the lacrosse for some very competitive matches. They loved staying with the host families as much as playing the games, when they said goodbye it was a frenzy of Snapchat and Insta address-swapping. Coach trips were noisy with messages pinging onto the girls’ phones from the students they had just stayed with. It’s been a wonderful trip. Thank you to the girls for being a credit to the School, and to Miss Bridge, Mrs Cameron and Mrs Howlett for sharing the journey.