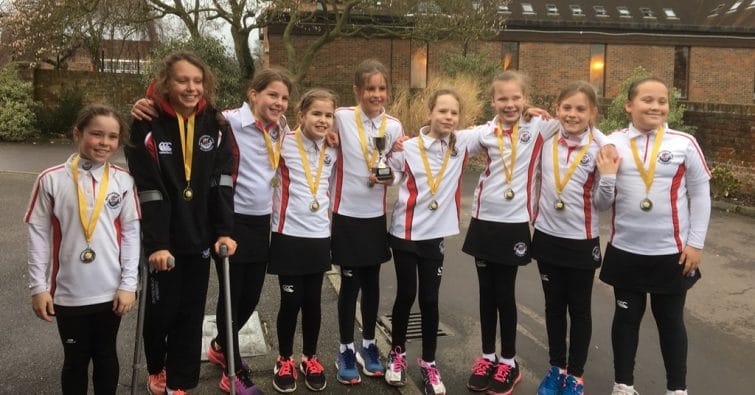 The U10 Netballers had a busy week with back to back tournaments on Wednesday and Thursday.

On Wednesday U10 Team Hatcher again emerged victorious in a tournament hosted at Ashford Prep. In the pool matches, they played excellently, enjoying comfortable wins over Kent College, Spring Grove, Dulwich College and Ashford B. In the semi-final they came up against Sutton Valence who were more aggressive in their play, but yet again, the girls played with precision and patience winning through to the final 11-2. The final was against Ashford Prep A and was very close early on. From a 3-2 half time score, the girls worked tirelessly to gain possession and eventually emerged winners with a scoreline of 9-4. Simply outstanding yet again from this very talented bunch of girls.  A huge well done to Sophie Ca, Sophie Cr, Esme, Abigail, Lucy, Anna S, Ella and Emily F

The girls followed up their tournament win with a second tournament success on Thursday, this time at Burgess Hill in West Sussex. The girls sailed through the group stages against unknown competition, beating St Christopher’s 8-2, Holmewood House 6-2, Nutley 11-2 and Downsend 7-2. This saw the girls in to the Round Robin Finals playing Copthorne Prep and Vinehall. The girls had their work cut out against a very strong Copthorne team who applied the pressure straight away. Copthorne pulled away in the first few minutes but Wally girls were not phased, pulling back a brilliant 3 goals. At the final whistle the score was 6-3 to Copthorne who applauded our great play- Wally girls were incredibly gracious in defeat and congratulated Copthorne on a great game. This saw us fighting to be runners up against Vinehall. The girls picked themselves back up after their recent lost, implemented some fantastic set plays on the centre pass, turning over countless balls and converting them in to goals. Wally came out victorious with a 9-0 win to be crowned as Runners-up, an amazing achievement!

Congratulations to the whole team who not only played some brilliant netball but showed great team cohesion and sportsmanship, a real credit to the Junior School!