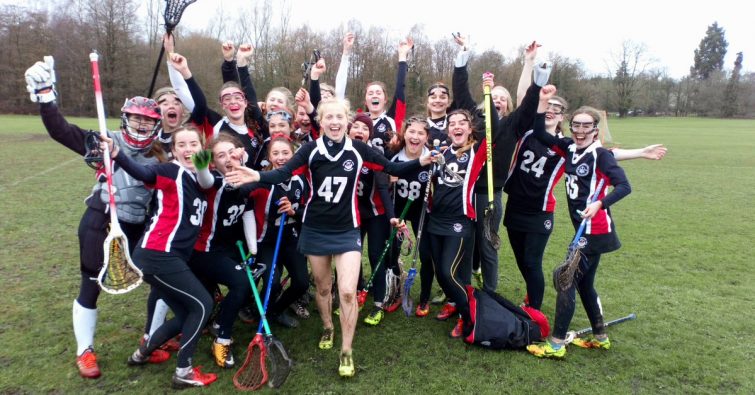 The U12 and U13 Lacrosse teams set a winning pace when they beat St Ronan’s 9-1 and 8-4 in home matches last Wednesday, giving our more senior teams a tough act to follow when they headed off to the National Schools’ Lacrosse Championship in Aldershot, last Saturday, Sunday, Monday and Tuesday.

The Seniors played incredibly well on the Saturday, with attack and defence both working fantastically throughout the entire field. Some great passages of pressure play in defence and incredible fluidity in attack meant that they finished a very commendable 3rd in their group after beating Abbots Hill, Malvern St James, Queen Chester, drawing to Godolphin and narrowly losing by 1 to St Helen’s and St Katherine’s and Downe House. On Sunday, they stepped up and showed their dominance in Division 1, making it to the last 16. They played extremely well in their knockout game, beating Putney High and progressing to the quarter finals v St Albans. It was a very tight and intense game with the eventual score being 3-2 to St Albans. A bittersweet end to what was a wonderful weekend. Wally Hall finished 20th in the country out of 90 schools- a superb achievement! I am beyond proud of all the girls, a very big well done to all of them.

The U15 team made a positive start to their Nationals day, and despite a 4-2 loss in their first game, the team went on to produce wins of 7-0, 4-1 and 4-0. With another game ending in a 2-2 draw, the girls finished second in their group, and proceeded to qualify for the last 16.

Confidence was high going into the game against Downe House, and some excellent link up play in attack gave Wally a quick 3-1 lead. Unfortunately, Wally could not quite weather the storm. Conceding in the very last minute to lose 4-3 was a very cruel result, and not representative of how well the girls had played in the game. Well done to the team, they made the PE Department extremely proud!

The U14 and U13 travelled up to Aldershot on the Tuesday for their first Nationals. Both teams played well throughout the day, working well in both defence and attack and learning lots as teams. The U13 came up against some strong competition in eventual winners Wycombe Abbey, and St Catherine’s but fared well with their other matches. The 1 win, 2 draws and 2 losses resulted in the girls finishing 4th in their group, which was not quite enough to see them qualify for the knockout rounds. The U14 had an extremely tough draw, but still performed well throughout the day. The attack and defence became a lot more fluid as the day progressed and finished the day with 2 convincing wins. The 2 wins and 3 losses meant they finished their group in 4th place behind Benenden, Godolphin and eventual winners Moreton Hall.

All of the teams should be very proud of their efforts this entire season; they have done themselves and Wally very, very proud.

For up to the minute match news and updates from all of our teams follow @wallyhallsport on Twitter.