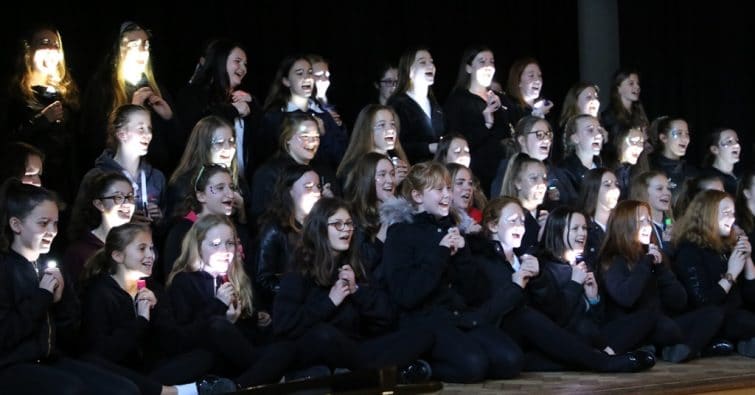 A fantastic afternoon full of surprises

Our guest judge this year was the brilliant Chloe Akam: singer, songwriter and TV judge on All Together Now.

As a personal friend of Ginger Spice she was well-placed to assess Montreal’s opening House Song, the Spice Girls’ Wannabe, which was performed with gusto, aided by a Ginger-style Union Jack dress and the other Spice Girl costumes.

Wannabe was Montreal’s ‘Guilty Pleasure’ – the other category this year was ‘The Oldies’, and for this they chose The Beatles’ Hey Jude as their smaller ensemble piece. Emma, fresh from her starring role in My Fair Lady, opened the number with a solo before being joined by others for the rousing chorus.

Next on was Knole, whose Guilty Pleasure ensemble was a Take That medley, which cruised smoothly through Stay Close to Me, Never Forget and Greatest Day among others, accompanied by Kayla on ukulele and Phoebe on guitar. A round of applause greeted two Year 7s dressed in  gold star costumes, as they came on stage to the words “All the stars are coming out tonight”, in Rule The World.

There was a good change of pace with Knole’s House Song, a medley of Elton John tracks. Knole  threw bags of energy at the old favourites: Don’t Go Breakin’ My Heart, Your Song and I’m Still Standing. In a witty piece of direction, petite Francesca from Year 7 performed gymnastics and ballet to Tiny Dancer, finally being held aloft by two bigger girls while doing the splits! Knole’s efforts were rewarded with third place overall and the prize for Best-Presented House.

The future winners, Chartwell were up next and they wowed from the start with a beautiful, pared back rendition of Where Is The Love by Black Eyed Peas. Their gentle, finger-clicking treatment of the song allowed some lovely singing to shine through, accompanied confidently by Year 13 Dolly on the piano.

This gave way to a thrilling Queen medley; the whole House stomped and clapped a rhythmic body percussion beat for their opening salvo, We Will Rock You. Good direction kept everybody in time as they made their way down the hall on to the stage for the rest of the medley. Year 7s got to play air guitar with blow up instruments, Mr Hughes and Mr Hill appeared in housecoats and dusters to I Want To Break Free, girls’ faces were eerily uplit by torches under the chin for Bohemian Rhapsody and the whole shebang was fittingly rounded off with We Are The Champions.

Quebec matched the audience’s heightened expectations with a witty, well-rehearsed medley of Abba songs for their House Song. Dressed all in white they ramped up the 70s vibe, kicking off with an a capella version of Super Trouper, which segued into Gimme, Gimme, Gimme, Voulez Vous and Dancing Queen, featuring a guest appearance from director of Sport Miss Leggett, in foil crown and cape. Very appropriately, they rounded off the House Song with a big ‘Thank you for the Music’, a theme tune for House Music if ever there was one! Quebec’s ensemble was equally visual with lots of energetic and slick choreography for a Jackson 5 mash up.

Penshurst flipped the House Music order of things on its head by starting with their ensemble, a pared back version of Lionel Ritchie’s Hello, sung with real poignancy and accompanied very simply by piano and guitar. A huge burst of colour then overtook the stage as the whole House stepped up for the House pop medley, wearing brightly coloured t shirts as they belted out, ‘I can be blue, I can be green, I can be violet skies’. Their pitch perfect song choices then continued as they sang, Teenage Dreams and We are Golden, which ended as the Penshurst performance began, pared back to beautiful voices.

The final performance slot of the afternoon went to reigning and long-standing House Music Champions, Down. They didn’t disappoint. Deputy Head Girl Michela opened Down’s proceedings with a solo and was gradually joined on stage by her ensemble House mates for a mesmerising rendition of Bruno Mars’ Rain, all accompanied by the accomplished Down House ‘orchestra’ of oboe, piano, cello and violins.

Down then ended the show with another show stopper, with Year 13 Sasha taking to the stage and opening their Stevie Wonder medley playing the first bars of You can feel it all over.  The whole House then joined in with a medley which included Superstition and Isn’t She Lovely.

When the School reassembled for the judge’s verdict, Director of Music, Mr Castell summed up the afternoon as, ‘fantastic’ and ‘full of surprises’ and thanked Head Judge Miss Akam for ‘doing the most difficult job with aplomb, poise, verve and spectacular silver glittery boots’. Miss Akam praised the performances saying, ‘there was just so much going on’ and highlighted the  imagination, seriously tidy moves, staging and musicality on show, before initiating a deafening School wide drum roll and announcing the results. Another huge cheer went around the Hall as  surprise guest, Mrs Milner, took to the stage to present the House Cup, which she bequeathed to the School upon her retirement. There were cheers and happy tears as Chartwell House Captains Hattie and Amelia and Year 13s Dolly and Francesca accepted the Cup for what was a fantastic Chartwell team effort, We are the Champions, was a very apt Chartwell song choice indeed!

Seeing the girls use their talents
un-self consciously together across year groups was a joy. This is only possible when girls trust each other to be supportive, positive and generous.