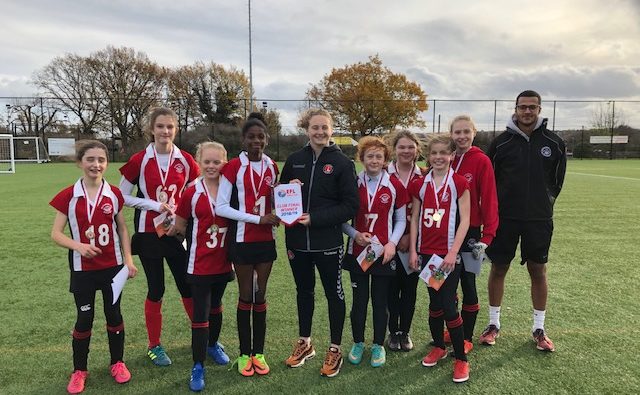 There are no ‘jumpers for goalposts’ where our Year 7 and 8 footballers are concerned. This new squad went to their first tournament as a team, the first round of the EFL Girls Cup, in November, and won it!

The squad travelled to Charlton Athletic Training Ground – along with 17 other teams from the local area – to compete in the first round of this English Football League Girls Cup, a six-a-side competition for U13s, which will culminate in a grand final at Wembley stadium in March.

Walthamstow Hall performed above all expectations, beating schools such as Charles Darwin, Newstead Wood and John Roan, on their way to winning their group.

Harder competition came in the semi-final, which they won in a tense penalty shootout.

The team’s best performance was in the final, where they sealed a 1-0 victory to win the whole tournament.

Following their win the team received a special visit at school in January from Charlton’s Women’s Captain who gave them a bespoke training session in preparation for representing Charlton Athletic against seven other teams in the South Regional Finals earlier this month. Sadly, the team didn’t make it through to the next round but what a brilliant start to their footballing careers!

Well done girls, we are really proud of you.